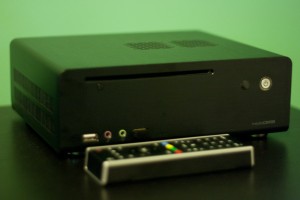 Well my first build of an XBMC media center has been a learning process. The software appears relatively straight forward but as you dig deeper with customization it gets murkier. Topping it off my hardware has been less then stable. But before I get to the complaints, lets go over the basic specs.

This motherboard is one of very few FM1 Mini ITX boards. It did receive very good reviews despite my issues, to be documented in the future. But performance-wise this build has proven very snappy. Windows install/updates take a strangly long time, but normal use is very snappy, and boot up time is fantastic (less then 25 seconds till your in XBMC). The SSD goes a long way towards this, and its also very good for quickly accessing fan art. Everything runs very smoothly.

The case I purchased from an importer located in Connecticut. Built in Hong Kong. Its a brushed aluminum Mini ITX with room for a slot loading optical drive. It also came with a remote. The remote worked well but didnt have adequate buttons to use XBMC. The slot loader fits a left had eject button, which is very rare. The blue ray drive I installed has the left hand eject, but some reason the button itself doesnt function. This has nothing to do with the case. Its not a huge deal as this was a refurb (cheap) and I’ve only used it twice since I built it.

To replace the remote that came with the case I purchased the NYXBoard. When working, its fantastic, however the RF transmitter seems incredibly weak. In fact, I had to plug it into the front USB ports because the 10 inch difference was weakening the signal too much.